I guess I can let the details out about the Secret Plan from late last/earlier this year. I talked about the Secret Plan quite a bit. The super secret subtitle was : Get Cute And Leave. I totally changed the way I ate, exercised, etc. from October 2009 until the middle of January 2010 in the hopes of losing weight so that I wouldn't need surgery or have as many health issues as I do. I also wanted out of a miserable marriage, but didn't have the self confidence to believe that I could be on my own in the emotional/physical state I had gotten myself into.
Then all hell broke loose in my life. I spent some time in forced hibernation... and all hope seemed lost. I had lost 40 lbs, but everything in my life was conspiring against me and I was really afraid that I'd find those 40 plus some. Luckily, on the other side of that ordeal, and some 8-9 months later, I only gained about 10-15 lbs back. It's time to get back on the program. Although, since I'm not nearly as unhappy as I was back then, none of it needs to be a secret. I realize that the holiday season is right here and I'm kinda re-starting this at the most difficult time. But I want it again. I don't want to have surgery. I don't want to be tiny. I just want to be cute. The Plan will now be subtitled: Get Cute and Learn to Love Myself Again. I think I'll start by getting my eyebrows waxed.
Posted by Abbie at 7:10 AM

Liam and his Mommy 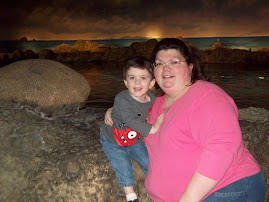